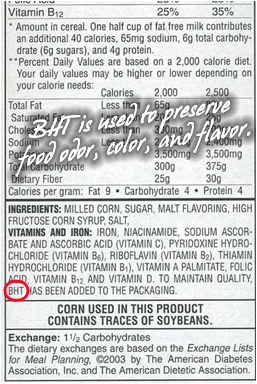 Growing up, I would watch as Mom would always scrutinize over the ingredient labels of foods, especially boxed cereals.  What was she looking at or for? Perhaps the sugary content that she would steer her family away from? The type of flour, additives, preservatives? To all of these, yes, but most especially the preservatives. Mom would never, ever purchase a food containing BHA and/or BHT preservatives.

While the chemistry and effectiveness these additives within food are straightforward, the controversy surrounding their health effects is a hot topic, and Mom knew it. She knew the warnings and concerns of consuming BHA and BHT from all the ongoing studies and health reports, thus avoided buying any and all foods containing these additives.

Butylated hydroxyanisole (BHA) and butylated hydroxytoluene (BHT) are closely related synthetic antioxidants used as preservatives to prevent fat spoilage in processed foods. While they are often added to dry breakfast cereals, enriched rice, potato flakes, and others foods containing animal fats and shortening, BHA and BHT are also used to preserve fats and oils in lipsticks, moisturizers, and other cosmetics and even pharmaceuticals. They are also banned in nearly every country worldwide except here in the U.S., while they are continued to used by manufacturers in nearly every packaged food in the states.

BHA was invented to extend the shelf life of products, thus allowing them a better chance to be sold. Its primary use is in food, food packaging, animal feed, cosmetics, rubber, and petroleum products. BHA is also commonly used in medicines, such as isotretinoin, lovastatin, and simvastatin, among others. BHT was created purely as an antioxidant additive. Like BHA, it is found in food, cosmetics, rubber, and petroleum products, and also in jet fuels, electrical transformer oil, embalming fluid, and pharmaceuticals.

Despite the fact that the U.S. Food and Drug Administration considers both BHA and BHT to be safe, the warning are no different for BHA and BHT today than when my Mom shopped for food. Studies have shown that long-term exposure to high doses of BHT is toxic in mice and rats, causing liver, thyroid and kidney problems and affecting lung function and blood coagulation. So why is it in our food? And under the Convention for the Protection of the Marine Environment of the North-East Atlantic, BHA is listed as a chemical of potential concern, noting its toxicity to aquatic organisms and potential to bioaccumulate. This is neither appetizing nor appealing. The oxidative qualities of BHA and BHT may also give way to carcinogenicity or tumorigenicity. Additional data suggests that some individuals may even have difficulty metabolizing BHA and BHT, resulting in health and behavior changes, including hyperactivity and autism.

Let’s face it, man-made processed preservatives are just not acceptable for ingestion, and BHA and BHT are not excluded from this group. We can live without food preservatives when eating a healthy nutritional diet. Our bodies are not concerned with the colors of the food with eat and would rather us stay away from the toxic and often residual found in these preservatives, despite the U.S. Food and Drug Administration’s stamp of approval.

Mom always said, “when in doubt, don’t.” Since BHA and BHT are preservatives with still very uncertain effects, in my eyes, they are a don’t. They are totally unnecessary in our diet. To avoid them, be certain to read your food labels before purchasing any processing food. If there are foods already in your pantry containing these ingredients, toss them away or phase them out.

Be Fit. Be Strong. Be Well.
Adriana